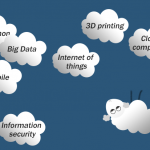 Once in a while I get stupendous insights of Life, the Universe and Everything, like “Ah, but that makes perfect sense, how could I have missed this before”. At some point of my life I was really fascinated by a field called Futurology and various future trends. I had great moments reading books about foresight into the the future of humanity and technology. Yet a bit later I came across a thing called Gartner Hype Cycle curves – graphs, which show you significant technology trends in the next 10 year period. It’s quite fun to compare different year curves and see what was the long running trends and what failed to establish